The Soul of a Rock

The Soul of a Rock

Three days ago, I travelled to the Petroglyph National Monument. 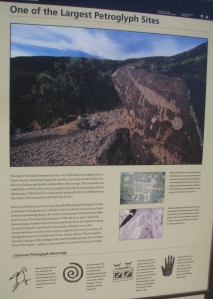 I did the 2.5 mile Rinconada Canyon trail with Petey, and the 1.5 mile Piedras Marcado Canyon Trail with Tammy. We saw several bunnies (one of whom was kind enough to pose for a picture. 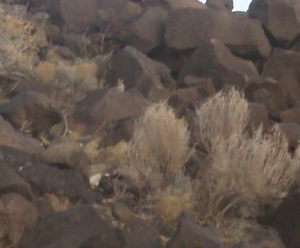 and a larger jackrabbit), and a roadrunner. I explored some of the “caves” in the rocks, with visible evidence of fire and nice apparent sleeping beds,
Petey and I even tried the bed out.

I had visited the Three Rivers site 10 days earlier on my way up, and I was struck by several differences between the 2 sites. Three Rivers for me was raw – uneducated, unprepared, it was a first impression that allowed my imagination to run wild. I immediately noticed that very few of the rocks at Three Rivers had more than one picture on them, and that of the hundreds of pictures, very few of the pictographs were the same…At first, I imagined that the rocks might tell a story. The same way that the stations of the cross did on the neighboring mountain. But stories usually have more repetition in them. Then, I remembered that Indians believed that rocks had a soul. It is not hard to understand why. A rock was used for almost everything requiring strength – shelter, hunting, fire, tools. So, an Indian might look at a rock the same way that an artist would look at clay, or God would look at the world. They would breath life into it, shape it, and respectfully extract from it what was needed for the moment. So each rock had a pictograph on it. Was it a bar-mitzvah of sorts – a once in a lifetime pilgrimage to the Haj- that transformed a person spiritually? Each pictograph representing a spiritual transformation? This collection of rocks : did it represent the souls of the Indians, gathered together so they would not be alone. I felt a spiritual presence in this place as I moved through the rocks – I began to chant, or speak in tongues. When an animal appeared in the pictograph such as a snake, was the snake physically present at that rock, perhaps killed, and its spirit transformed into the rock’s spirit? When 2 pictures did appear together on a rock, was it the joining of 2 human souls, as in marriage?
Disk 2 Pic 44 human aspect soul
Pi c 36 disk 2 position pic 41 sun dial
I would clearly observe at least 2 types of influences – the rocks had meant one thing to one people. Perhaps they had been conquered, and the rocks were used as a lookout over the plain by the next group. This group might have more geometric, analytic pictographs. Did they represent battle plans? Positions to be occupied by certain people during an attack?
Other pictographs such as the one below aligned exactly with the 4 directions given by the sun.
The national pictograph site in Albuquerque was different. It was more populated and less remote. Clearly centuries of different people had used the site differently. I noted immediately the more frequent human faces and images at this site. (Indian) There were also dual images occasionally – like the love birds, and evidence of Christian influences. There was a rare pictograph that spilled over onto the neighboring rock. And another that defied 2-dimensionality and had been carved around the edge of the rock, to emphasize the face-lie aspect of the rock. There was the Hopi ritual ceremonial pictograph that could only be seen from a certain angle with certain light.

It’s worth some reflection. I feel very close to native religious experiences with nature, because animals and nature communicate with me in meaningful ways. I interpret this communication as deriving from God simply because of its consistency. I don’t think that a “bird spirit” tells me one thing, and a “dog spirit” tells me another thing, and the wind tells me something else. Unlike the physical conflict that I can observe between these entities in the actual world, when I experience a message through these things, I don’t sense conflict between them. Therefore, I believe there is a Great Spirit that uses these physical elements to communicate. Although I have great respect for Jesus, this communication through nature is more real to me than my understanding of Jesus is. Jesus was an incredible teacher, with a powerful message, but I don’t experience Jesus daily, the way that I do communication with wind, or the natural world. So, what allows us to believe that humans have a soul and that animals or the natural world don’t?